History of The Jackson Assembly

The Jackson Assembly is a non-profit  organization founded in 1962 by a group  of men and women who realized the town was losing many of the older homes and  buildings that made it unique.  The achievements have been many and varied.  To raise money in order to be able to purchase and restore historic buildings, through long hours and days of hard work, the group organized an annual fund raiser event which is in it’s 55th year. The success of  The Jackson Assembly Antiques and Art Show has enabled the purchase  and restoration of the original 1816 Feliciana Courthouse, the ca 1836 Pipes-McKowen Store and the McKowen Store.  The latter two buildings serve as headquarters for the Antiques and Art Show each year.  Among the early purchases and restorations was the 1850 Johnny Jones Store .
Proceeds from the the Antiques Show and Art Show are used to restore and  maintain Assembly properties as well as to purchase and preserve other historic structures in the area, and to promote tourism in the area.

Some of the many accomplishes of the non-profit Assembly are as follows:
Helped establish and document the Jackson Historic District with La. Division Historic Preservation resulting in the placing of 124 structures on the National Register of Historic Places in 1982.
Installed historic markers in front of historic homes.
Sponsored and implement3ed a Town Landscape plan with the help of Dr. Neil Odenwald of LSU
resulting in enabling the town to obtain a grant for sidewalks and period lighting.
Purchased and installed historically correct litter barrels for the town.
Provides space for Charter Street Studio artists and as a result a Cultural District was approved.
Co-sponsored with the Town of  Jackson a development and preservation plan for Charter and College Streets.
Assisted financially in publishing Michael F. Howell’s definitive early history of Jackson (a Journey to War’s Eve).
Co sponsored two walking tour brochures featuring structures in our National Register Historic District.
Researched and published a book of  Jackson History with photos and history of the historic homes called Yesterday, Today and Tomorrow. 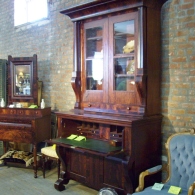 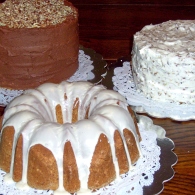